Recently, a teenager used a Walmart PA system to broadcast a message telling all blacks to leave the store. As a result of this lackluster inconsequential villainy, my dark corporate masters have declared a major policy change for our in-store phone/PA system. First off, instead of hitting that little 'PAGE' button, we must dial a # & 3 digit code to link to the PA system. Secondly, all phones on the sales floor without a continuous employee presence must be unplugged and hidden. That's going to really suck if I have to call a Code White(injury) or Code Adam(missing child) out in the outlying areas at night. Thank you, political correctness! Way to make everyone's day a little less convenient.
Posted by Roadkill at 11:03 AM 1 comment:

In preparing for zombies, commies, and natural disasters I think tend to think more for guns, ammo, and neat gear than we do the other little things. Ever thought about your glasses? For those millions of us wearing contacts and eyeglasses, how many of us have backups? Most folks with contacts tend to have a set of glasses, but do either group have any glasses ready for bad conditions?

If you're into anything like air-soft or paintball it quickly becomes evident that you need to wear protective eye wear. Also, most physically active sports exhibit the need for tough eye wear that can stay in place. In any disastrous situation can bring the same issue to bear. Even while practicing at the range, you need eye protection, but most folks with glasses simply use their normal glasses as a protective barrier regardless if they're as tough as even cheap shooting glasses are. Having just a normal pair of glasses simple doesn't cut it.

There are options available for us nearsighted and farsighted folks. Custom shooting glasses are available from numerous manufacturers, but these can be very expensive. However, one system revolves around prescription inserts vs the entire lens. These inserts known as RX carriers, can be put into multiple shooting glasses and goggle systems. Gunner's Alley has a wonderful informative site on all of this. Then they also
retail the ESS ICE system of carrier ready glasses. I've bought holsters from Gunner's Alley before, and found them to be very helpful and provide excellent service. I really need something like this. The inserts not not terribly expensive. For less than $150 USD you can have reliable protection for your eyes regardless of your sight.
Posted by Roadkill at 6:04 AM No comments:

Here's a lovely video from the late 80's comparing the power of different calibers of rifles, and even a pistol and shotgun using the noble watermelon. It puts up some great points that we already know. Intermediate rifle rounds are on the low side of rifle power. Share with those folks you know that don't get it.

One of Each: Handgun, Shotgun, and Rifle

I want to be a cool kid, too. Thanks to JayG for helping me spend my morning thinking about this stuff.

Handgun: I would say a nice .45 of some sort, but I started thinking about CCW. I'd go with a Sig Sauer 228. Its just a 9mm, but it'll conceal well , but be rugged enough for any conditions. Plenty of ammo too.

Shotgun: NIB Classic Ithaca m37 12 gauge riot. The one with the full out 8rd tube. Nothing recently manufactured.

Rifle: Yugoslavian m70 series AK. If no physical mods, I'll take an underfolder like my m70ab2. AKs. They kill shit out to 200yards just fine.
Posted by Roadkill at 10:42 AM No comments: 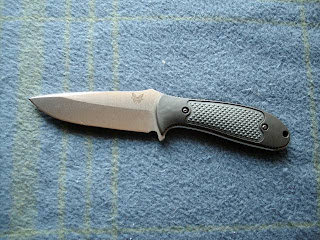 I really have gotten to like Benchmade's knives over the past year. I like the steel and I like the comfortable grips. So for a utility field knife I have picked up this 151 Fixed Griptilian. 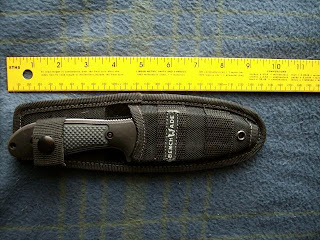 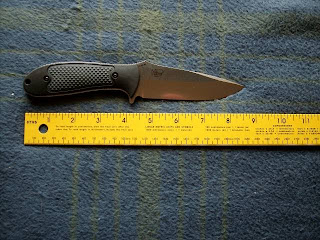 Many reviews I read discussed how these were fine knives and all, but how they couldn't do everything Fallkniven or other uber-survival knives could do. I didn't want something for chipping through concrete or batoning through logs. I wanted a good cutter that could be easily resharpened for any normal cutting tasks that might arise. Cutting rope, cloth, grass, animal flesh or maybe scraping any number of things. 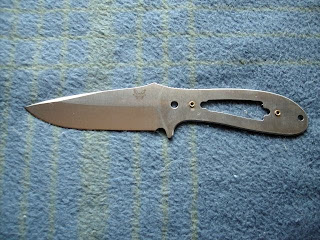 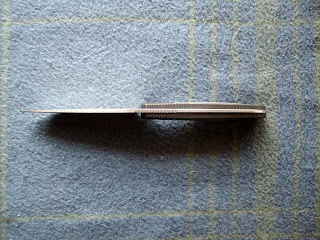 A knife is primarily a cutting tool, not a digging tool or a wood chopper. It might get pressed into defensive use, but even then as a last resort. 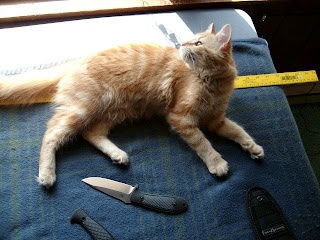 Its only a 4inch blade, but that will work for most normal tasks. It even leaves room for perhaps a small hatchet?
Posted by Roadkill at 11:01 AM No comments:

End the AK vs AR debate!

Let us lay this debate down. Instead of trying to deride the other guy, lets concentrate on making something so fucking awesome, that we will neither want AK or AR.

The ARK should combine all of the best qualities of both AR and AK. The accuracy, ergonomics, and interchangeability of an AR must blend flawlessly with the reliability, durability, ease of maintenance, and a dab of the cost effectiveness of the AK platform. The end product shouldn't cost more than $800 for a standard model and less would be great.

I think the piston AR uppers are a step in the right direction, but maybe not enough. I want to see a bit more toughness added. As for some of the other ARish rifles out there, I don't think $2,500 is anything near a reasonably price for a fighting rifle.
Posted by Roadkill at 4:05 AM No comments:

First up is my Yugoslavian M70AB2 Underfolder, one of the best Century Arms AK clone builds as Century contracted the work out to another company. 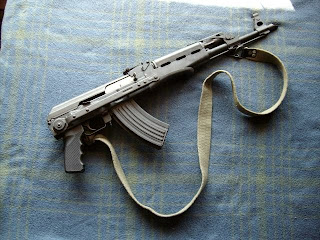 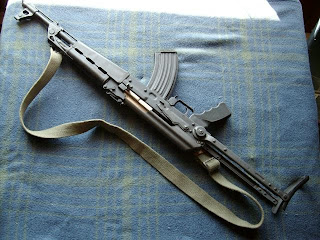 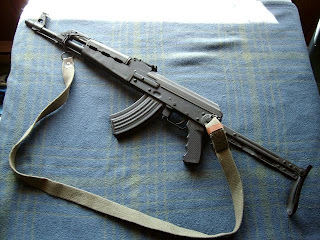 Next comes my Remington 870 Magnum. It was a riot gun in a prison until sold as surplus in excellent condition but some rack wear. I have since added Knoxx Spec Ops stock, a Speedfeed polymer forend, and a Wilson Scattergun Technologies 3 round extension. 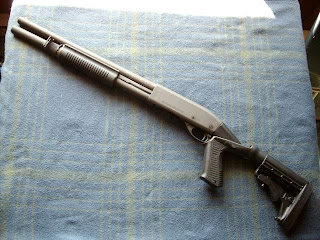 The Benchmade 151 Fixed Griptilian is one of my most recent purchases. Its going in the BoB as utility fixed blade. 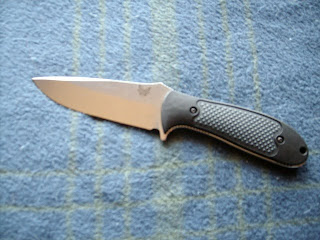 Last year's birthday present from my lovely wife is this neat little Fallkniven G-1 Garm fighter. A nice little 3inch bladed boot knife. Once I get my Kydex sheath-making equipment together, the Garm will get the first IWB sheath. 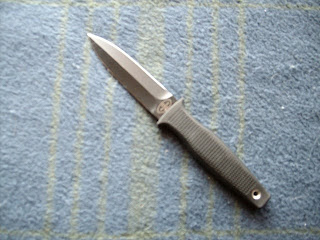 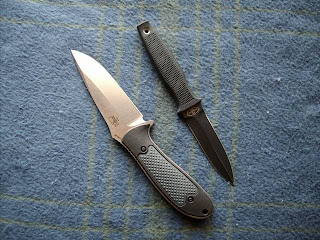 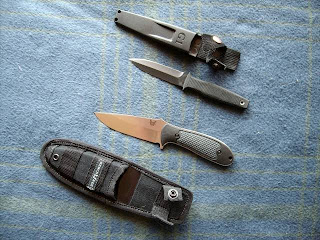 A while back I helped an acquaintance get a large TV out to his car in bad weather. When he went to cut the garbage bags up to get the TV sealed up, he pulled a large Cold Steel Voyager folding knife. When I commented that I carried a much smaller EDC blade he gave me a bit of his grandfather's wisdom, "A big knife will cut anything a small knife can AND anything a big knife can."

Looking around the net, I noticed that there are very few large sized folders. I'd considered a Benchmade Ruckus. However, $170 for a 4inch folder, even with the excellent axis-lock, was just a bit steep for an often carried blade. Eventually, I found a magnum sized folder that worked the way I wanted, made from a good steel, and was at the right price. The SOG Spec-Elite II. 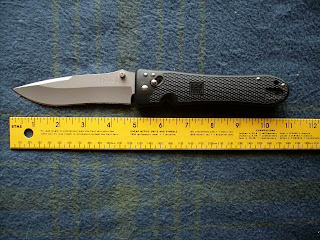 The Spec-Elite comes in a 4 and 5 inch version. I chose the massive 5inch. Its made out of VG-10 steel. One of the better Japanese knives steels. The Arc-lock of the SOG folders, works much the same way as the Axis-lock and features an even smoother operation. The price was excellent. Most places sold this design for over $120, but Yourcornerstore.com had it for only $100.

I've carried this for nearly two months. I still have some issues with this. Mainly in physically carrying it. The size causes two considerable problems. It has considerable heft. Next, its size is so great that when you pull the knife out, your thumb is not in line to flip open the knife. 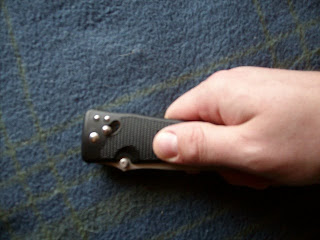 It can be opened with a wrist-flick, one does not want to do that too much. I've found it loosens up the screws a little too much if done often. The next problem is that I'm nervous to use it! Its size is enough to cause coworkers to complain. Personal knives are prohibited, but this rule is totally ignored so long as they don't get used more than our box cutters. A 3inch EDC blade vs a 5inch blade might be hard to explain to the bosses. I think the 4inch version would work the better for EDC in a work environment. 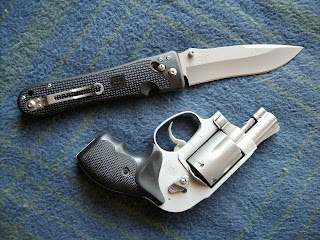 There are a lot of positives about this knife though. Its HUGE! For a knife that may be put into use as a weapon, there is a certain level of confidence that this inspires. This knife is big enough to skin anything from a moose to a goblin. The opening and closing is extremely smooth. The pocketclip has good retention and carries well. I can see why folks have proclaimed the excellence of the SOG clips. The plastic grips have a texture that allows for a solid grip but doesn't hurt either. 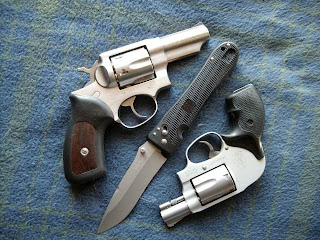 Did I mention its huge and cool and is a big beautiful pig sticker? This is a neat knife really. I think the smaller version would be the superior large EDC folder, but the big dog is still a great knife.
Posted by Roadkill at 9:22 AM 3 comments: