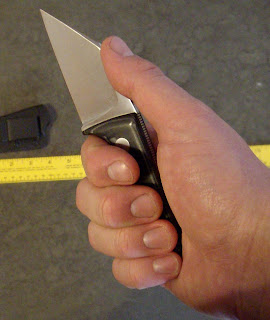 Recently, I've been visiting Sharpthings.net's IRC channel and talking knives with the folks there. One of the regulars, Dr. Snubnose, a professional martial arts teacher, NFA qualified firearms instructor, and knife guru, has a lot of interesting things to say about cutting power in knives. Doc is well known on various knife forums for his meat tests for cutting ability. He wraps a large slab of meat in several layers of plastic wrap and then denim to see what knives work the best. Among his top performers included three Wharncliffe style blades. Two of which, the Ronin and Yojimbo, are out of production Spydercos that retailed in the $100 range. However, the third was the Dirk Pinkerton designed Meyerco Wharning. According to the good Doc, this extremely humble $17 knife matched the folding Yojimbo in making 3"- 3 ½” on cuts and slashes with it's 2.75 inch blade. When my wife bade me to order her some paracord to craft with, I also slipped this little guy into the order from BladeHQ for $16.95. 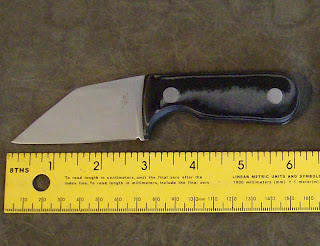 The Wharning is a wharncliffe style blade made from 7CR17 steel. This is not a premium steel in any way. Its roughly equal to 440A. While, this steel will not hold an edge too long, I can safely say that it is simple to resharpen to an effective shaving edge. After cutting open about fifteen thick dense cardboard cases of Tide, it went from a barely shaving factory edge to just sharp. However, less than ten minutes sharpening had it to shaving sharp. Easy! 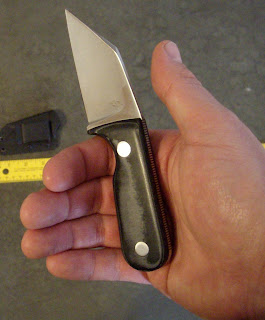 The blade itself is huge for its stubby length. The stock is pretty thick and stays that way for about half the blade before hitting a slight swedge and sharp straight decline to tip. It is an extremely broad blade with a massive belly. It is a good cutter and the tip control is excellent.

The grips are a cheap micarta canvas. They are semi-smooth. They worked well enough for my dry hands, but I dunno about how well they will hold up against blood or grease. There is a good finger choil that naturally improves grip and retention. While, the grip is rather thin, the belly on the grip is pretty generous. This fills the hand better and makes the short grip work well. On the big negative, there is no jimping past the grips. Control with a thumb well forward on the spine is pretty damn good but it would be perfect with jimping. 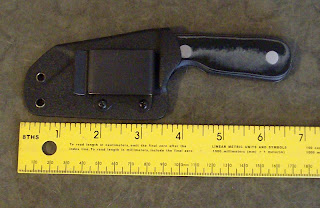 The sheath is a pretty basic molded Kydex affair with a metal reversible belt clip. There is enough of a rim where the thumb naturally rests to help push the sheath off when drawing the blade. The choil is exposed and makes drawing much easier. Unfortunately, this taco fold sheath doesn't have any rivet holes that I can use for carbiner carry without using a long tether to the bottom of the sheath.

Overall the Wharning performed well. Cutting boxes, tape, and wrap well. The tip control was great. Ease of resharpening is excellent. Edge retention isn't great, the grips need to be bit rougher, and jimping for the thumb will have to to be added yourself. For $17, the Wharning is a bargain even with its deficiencies. It is replacing my cold steel tanto for now.

On Warriortalk, Dirk Pinkerton himself posted some interesting news for the Wharning. Meyerco has taken the old version off production and is working with Pinkerton to bring an enhanced version with full jimping, textured G10 grips, and even a changed sheath that will be compatible with tec-loks for around the same price as the original. No idea when that will be released, but be assured, I will be picking one up.

UPDATE: The Wharning in the kitchen.
Posted by Roadkill at 10:01 AM

Wow man, what a fascinating review, especially in light of our discussion on wharnies. The post on WT at the end was also extremely interesting. I'll definitely pick up the updated version when it gets released. For a Sub-$20 knife this thing is sweet. Especially with the proposed improvements.

I've had one of these knives for about 3 years now. It stays in my car just in case.

I picked up 2 more of the Wharnings for $8.99 each before Christmas. These must have been the close-outs that Dirk was speaking of. I want to say that I got them from Smoky Mtn Knife Works but that is a guess.

Great review ! I just found this blog. I recently met with Meyerco and finalized the improved design. We are also looking at a smaller key ring version and a new folder to match the changes. I am hoping for a release at 2013 SHOT show. I will be listing the improvements on my site.

I love how the blade of the knife is like a reverse tanto wharncliffe. It is really an interesting shape.